It’s that time of year. Your summer tan has faded and now you’re thinking of heading indoors to soak up some rays.

But, did you know that a tanning booth could cause effects that are more than skin deep? Turns out you could also be hurting your vision. Tanning beds can emit ultraviolet radiation 100 times stronger than the sun, putting you at greater risk for damage to your skin and your eyes.

Too much UV exposure can cause sunburned corneas, called photokeratitis. Symptoms include tearing, swollen eyelids, and a gritty sensation when you blink. Healing can take up to three days once the eyes are out of harm’s way, with artificial tears and cool compresses used to relieve symptoms. 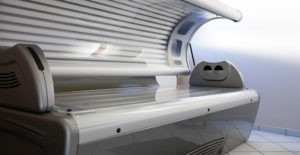 However, even temporary effects can have long-lasting consequences.

Long-term UV damage could result in the following:

Formed when proteins in the eye’s lens unravel and tangle, clouding vision. Aging is the most common cause, but studies have shown cataracts appear to be enhanced through UVB exposure. The World Health Organization estimates that up to 20 percent of cataracts may be caused by overexposure to UV radiation.

The loss of central vision due to retinal damage, which often happens naturally with aging but can be exacerbated with UV overexposure. (https://www.ncbi.nlm.nih.gov/pubmed/21646979)

UV radiation has been linked with squamous cell carcinoma of the conjunctiva, the clear membrane that covers the front of the eye and the underside of the eyelids. Melanoma can also strike the uveal tract (the layer of the eye that contains the iris) and sclera (the white part of the eye). Various types of skin cancers can also form on the eyelid’s thin, sensitive skin.

A yellow, bumpy growth that can form near the inner corner of the eye on the conjunctiva. This growth could expand to cover the cornea, becoming a pterygium.

UV damage is cumulative and often goes un-detected, so the sooner you start exposing your eyes to these light rays, the more harm you could do over the long term. Younger tan-seekers should take special care.

“Just because you don’t feel uncomfortable doesn’t mean you’re not getting exposed. You do have to be aware,” says Dr. Rachel Bishop, of the National Eye Institute. “You have to protect both your skin and your eyes.”