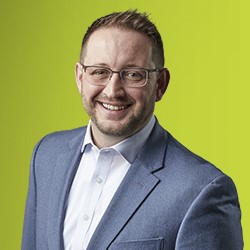 Chad came to VBA in November 2015 with 15 years of experience in the vision and healthcare industry. He transitioned from his role as Underwriting Manager to his current position of Dental Account Executive in July 2017. He earned his Bachelor of Business Administration from California University of Pennsylvania in 2008.

As the Dental Account Executive, Chad educates new and existing groups about VBA dental plans. Chad has a relentless work ethic, a willingness to learn, and the aptitude to follow methodical processes and procedures; all of which help him excel at his position.

Chad grew up in West Mifflin, PA and he currently lives in the Robinson area with his wife and daughter. Chad has been a member of the Professional Bowlers Association since 2013. He enjoys spending time with family and doing yardwork.